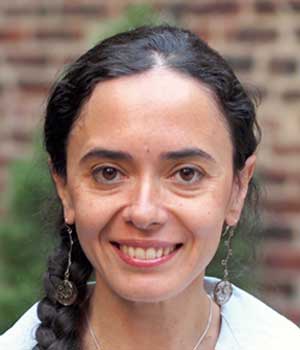 Recipient of the 2021 Early Career Award for Soft Matter Research

For the seminal use of physical principles in understanding living transport networks.

Eleni Katifori graduated with in B.Sc. degree in Physics from the University of Athens, Greece in 2002. She then moved to Harvard, where she obtained her Ph.D. degree in Physics in 2008. She was a fellow at the Center for Studies in Physics and Biology at Rockefeller University in New York till 2012, when she moved to Germany to start a position as an independent group leader at the Max Planck Institute for Dynamics and Self-Organization in Goettingen. In 2015 she returned to the US to join the faculty of the Department of Physics and Astronomy at the University of Pennsylvania as an Assistant Professor, and was promoted to Associate in 2020. Eleni Katifori is a recipient of a Burroughs Wellcome Career Award at the Scientific Interface, an NSF Career Award and is a Simons Investigator in the Mathematical Modeling of Living Systems. Her research interests are primarily theoretical, with a strong focus in the topology and geometry of soft and living matter, and in particular fluid flow networks and thin shell elasticity.

About the Early Career Award for Soft Matter Research

The Soft Matter Award recognizes outstanding and sustained contributions by an early-career researcher to the soft matter field.

The award is generously sponsored by Solvay.