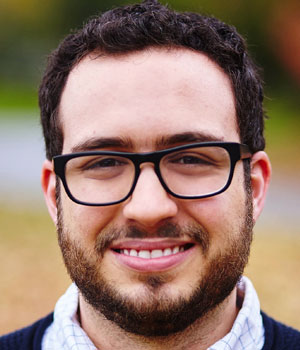 Recipient of the 2020 Rolf Landauer and Charles H. Bennett Award in Quantum Computing

For outstanding achievements in entanglement theory and in the intersection of quantum computation, quantum thermodynamics, and quantum many-body physics.

Fernando Brandao obtained his BSc in Physics at Universidade Federal de Minas Gerais in 2005 and his PhD in Physics at Imperial College London in 2008. After postdoctoral positions at Imperial College, Universidade Federal de Minas Gerais and ETH Zurich, Fernando became a lecturer in computer science at University College London (2013-2015) and then a researcher at Microsoft (2015-2016). Since 2016, Fernando is the Bren Professor of Theoretical Physics at Caltech. He was a Google Visiting Faculty (2018-2019) and is currently an Amazon Scholar. Fernando's main research interests are quantum computation and quantum information theory, in particular entanglement theory and the intersection of quantum computation, quantum many-body physics, and quantum thermodynamics. For his PhD work Fernando was awarded the best thesis prizes from both the European Physics Society and the Institute of Physics. He was awarded the 2013 Quantum Information Young Investigator Award.

About the Rolf Landauer and Charles H. Bennett Award in Quantum Computing

The award, established in 2015 by the APS Division on Quantum Information (formally known as the APS Topical Group on Quantum Information), and partially endowed by the International Business Machines Corporation, honors Landauer's and Bennett's pioneering work for foundational discoveries between information and physics. Rolf Landauer made many contributions to the understanding of the relationship between thermodynamics and information, the most well-known being Landauer's principle that states the minimal energy required to erase a bit is kT ln(2). Landauer was a fellow of the APS and a winner of the Oliver Buckley Condensed Matter Physics Prize. Charles Bennett is one of the founders of the field of quantum information and computation. Bennett is a fellow of the APS and his citation reads "for inventing reversible computation, for his analysis of Maxwell's demon, and for co-inventing quantum cryptography and quantum teleportation." Quantum teleportation is a key primitive in quantum computation and plays a significant role in current methods for quantum error correction and universal quantum computation. Bennett's work helped establish quantum information science as a coherent discipline, one that illuminates other areas of physics and has important practical applications.