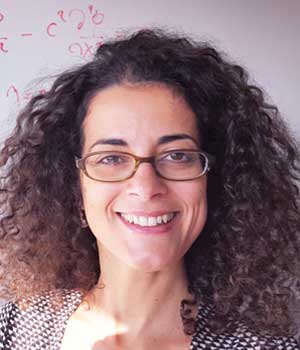 Recipient of the 2021 Max Delbrück Prize in Biological Physics

For the incisive combination of observation, analysis, and theory to elucidate the beautiful statistical physics problems underlying collective behavior in natural flocks and swarms.

Irene Giardina is Associate Professor of theoretical physics at the Department of Physics, Sapienza University of Rome, and associate member of the Institute for Complex Systems of the National Research Council, and of the National Institute of Nuclear Physics. She received her M.S. in 1994 from the University of Pavia and her Ph.D. in 1998 from the Sapienza University of Rome. After postdoctoral stays at the Department of Theoretical Physics, Oxford and at Institut de Physique Théorique, CEA Saclay, she moved to the Institute for Complex Systems in Rome. In 2013 she joined the faculty of the Department of Physics, Sapienza, where she currently coordinates the Master program in Biophysics. She is the recipient of a European Research Council starting grant and a PoC grant, and a member of various European research networks. After working for several years on the statistical physics of glassy behavior, Dr Giardina's research focused on the physics of biological systems. In 2005 she founded with Andrea Cavagna the COBBS lab (Collective Behavior in Biological Systems), the first lab to collect 3D large-scale experimental data in the field on flocking and swarming behavior, and to build theory starting directly from the data. In her research, she applies a statistical physics approach to understand how collective behavior emerges in animal groups and — more broadly — in biological systems.

About the Max Delbrück Prize in Biological Physics