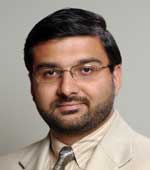 Recipient of the 2021 Joseph F. Keithley Award For Advances in Measurement Science

Irfan Siddiqi is a Professor of Physics at the University of California, Berkeley, and a faculty scientist at Lawrence Berkeley National Laboratory (LBNL). He is the director of the Quantum Systems Accelerator, a US Department of Energy funded national research center, and the Advanced Quantum Testbed at LBNL that focuses on state-of-the-art superconducting quantum computing technologies. Siddiqi's research has focused on high-fidelity readout of superconducting quantum bits, quantum simulation and computation, quantum feedback, quantum trajectories, squeezing and measurement limits, and near-quantum-limited microwave frequency amplification. He is a fellow of the American Physical Society (APS) and a recipient of its George E. Valley prize (2006). He received the UC Berkeley Distinguished Teaching Award in 2016--the institution's most prestigious honor for teaching and continued commitment to pedagogy. Siddiqi received his A.B. in Chemistry and Physics from Harvard University in 1997, and a Ph.D. in Applied Physics from Yale University in 2002.

About the Joseph F. Keithley Award For Advances in Measurement Science

The Keithley Award recognizes physicists who have been instrumental in the development of measurement techniques or equipment that have an impact on the physics community by providing better measurements.

This award is endowed by Keithley Instruments, Inc. and the Topical Group on Instrument and Measurement Science (GIMS). The award honors Joseph F. Keithley for his outstanding contributions and numerous accomplishments in the area of sensitive and precision instrument development and measurement techniques.