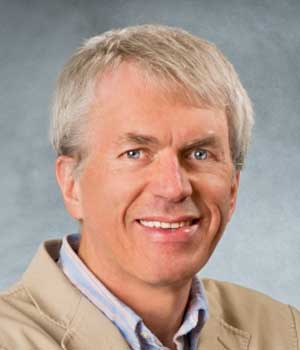 University of Illinois at Urbana-Champaign

Recipient of the 2021 James C. McGroddy Prize for New Materials

For pioneering the atomic-layer-by-layer synthesis of new metastable complex-oxide materials, and the discovery of resulting novel phenomena.

James N. Eckstein is a Professor of Physics at the University of Illinois at Urbana-Champaign and a Fellow of the American Physical Society. He shared the Bernd T. Matthias Prize in 2012. His research group currently works on quantum materials and devices exploring novel physical phenomena, as well as on the technology of quantum circuits. This research includes the study of topological superconductivity emergent in heterostructures incorporating superconductor and topological materials. It also includes studying materials and devices for ultra-clean quantum circuits with enhanced coherence. His work to develop atomic-layer-by-layer molecular beam epitaxy began at the time of the discovery of high temperature superconductivity (HTS) in complex oxide materials. It included the growth and study of different cuprate phases and heterostructures aimed at understanding fundamental aspects of high HTS. It also explored the properties of artificial and thermodynamically unstable HTS phases grown using precise atomic layering. This work extended to incorporate other complex oxides into epitaxial heterostructures, leading to a variety of phenomena arising from the programmed atomic-layering architecture. Prior to his work involving materials, Eckstein was a student and post-doc at Stanford University where he received his PhD in 1978. His thesis research included the invention of the optical frequency comb. He received his BA in physics from St. Olaf College in 1973.