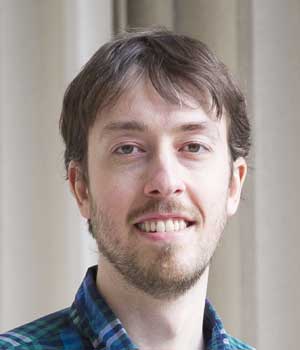 Recipient of the 2021 Irwin Oppenheim Award

For developing a theory of the emergence of self-replication in simple chemical models, and the definition of general design principles for constructing self-replicating objects, which is published in the article entitled "Design of conditions for self-replication" in Physical Review E 100, 022414 (2019).

Jeremy England earned his A.B. summa cum laude from Harvard in 2003 in biochemical sciences. Subsequently, first as a Rhodes scholar at Oxford, and then as a Hertz fellow at Stanford, he earned a PhD in physics doing work in the protein folding field. As a Lewis-Sigler fellow at Princeton he published an analytical solution the folding problem for globular protein domains. In 2011, he joined the physics faculty at MIT, leading a group seeking to derive exact results in nonequilibrium statistical mechanics that would aid in understanding the emergence of lifelike behaviors in driven many-body systems. He now serves as Principal Research Scientist at the Georgia Tech School of Physics and as senior director in AI/ML for GlaxoSmithKline.

About the Irwin Oppenheim Award

The award was made possible by generous contributions from Irwin's family and friends along with his students, colleagues, and members of the Physical Review E community. We are deeply grateful to all those who helped establish this award by contributing to the Irwin Oppenheim Award fundraising campaign.