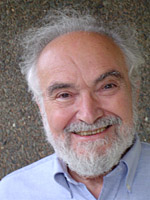 Recipient of the 2021 Dannie Heineman Prize for Mathematical Physics

Joel Lebowitz was born in Taceva, then in Czechoslovakia, now Ukraine, in 1930 into a Jewish family. During World War II, he was deported with his family to Auschwitz in 1944. After being liberated from the camp, he moved to United States by boat and studied in an Orthodox Jewish school, at Brooklyn College, and at Syracuse University. He cites cites his Brooklyn College teacher, Melba Phillips, and his Syracuse University thesis advisor, Peter Bergmann, as early influencers in his career. After earning a bachelor's degree at Brooklyn College and master's and doctorate degrees from Syracuse University, Lebowitz became a National Science Foundation postdoctoral fellow at Yale University, where his mentor was Lars Onsager. He worked at the Stevens Institute of Technology, in Hoboken, New Jersey, and Yeshiva University, in New York City, New York, before joining Rutgers University in 1977, a position he currently holds. Lebowitz was nominated for the Heineman Award by Elliott Lieb, an American mathematical physicist and professor of mathematics and physics at Princeton University who specializes in statistical mechanics, condensed matter theory, and functional analysis. Lebowitz and Lieb worked together to "prove the existence of thermodynamics for ordinary matter with Coulumb interactions," the force between two electrically charged particles. It is an accomplishment that Lebowitz said was the most exciting moment of his career. Lebowitz became the editor-in-chief of the Journal of Statistical Physics in 1975, a position he held for 43 years. He also was editor/coeditor of the Annals of The New York Academy of Sciences, Collective Phenomena, for 12 years. He has received many awards during his career, including, most recently, becoming the recipient of the "Grande Médaille" from the French Academy of Sciences in 2014. In addition to his accomplished career as a researcher and published author of work in mathematical physics, Lebowitz is also involved in human rights work. He believes scientists can and should strive to have a positive influence.

About the Dannie Heineman Prize for Mathematical Physics

The Heineman Prize recognizes outstanding publications in the field of mathematical physics.

This prize was established in 1959 by the Heineman Foundation for Research, Educational, Charitable, and Scientific Purposes, Inc., and is administered jointly by the American Physical Society and the American Institute of Physics. Biographical information on Dannie Heineman.