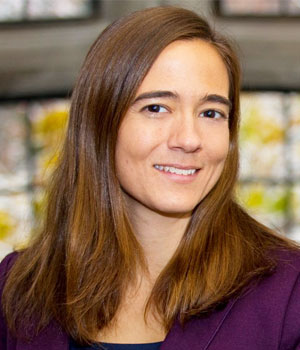 Katherine Aidala is a Professor of Physics and Director of the Fimbel Maker and Innovation Lab at Mount Holyoke College. She completed her undergraduate degree with a double major in applied physics and psychology at Yale University in 2001, and received her PhD in applied physics from Harvard University in 2006. She received the Presidential Early Career Award for Scientists and Engineers (PECASE), as well as the NSF CAREER award, in 2010, and was named a Cottrell Scholar of 2009 by the Research Corporation for Scientific Advancement. After building a cryogenic atomic force microscope (AFM) to image electron transport in two-dimensional electron gases for her PhD, she moved to using scanning probe microscopy to study fundamental properties of a range of material systems at room temperature. Her work includes studying mechanical properties of bacterial biofilms and investigation of the magnetic behavior of ferromagnetic nanostructures under the application of a local circular magnetic field resulting from current flowing through the tip of the AFM. Her present focus is on transport in non-traditional semiconductors, including organic semiconductors and nanocrystal quantum dots, using time-resolved measurements to observe charge motion in these materials. Throughout this work, she has mentored fifty undergraduate women in her research lab, many of whom have continued on to graduate school or employment in STEM fields.

The Faculty Research Prize recognizes a physicist whose research in an undergraduate setting has achieved wide recognition and contributed significantly to physics and who has contributed substantially to the professional development of undergraduate physics students.

The prize was established in 1984 by a grant from the Research Corporation for Science Advancement, a private foundation for the advancement of science and technology.