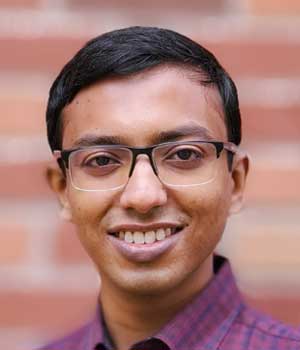 Recipient of the 2021 Irwin Oppenheim Award

For developing a theory of the emergence of self-replication in simple chemical models, and the definition of general design principles for constructing self-replicating objects, which is published in the article entitled "Design of conditions for self-replication" in Physical Review E 100, 022414 (2019).

Sumantra Sarkar obtained his B.Tech in Engineering Physics with Honors in Physics from IIT Bombay in 2011. He obtained a PhD in Physics in 2016 from Brandeis University, where he investigated the origin of shear induced rigidity in granular materials. He followed his tenure at Brandeis with postdoctoral research at MIT, where he worked on a theory of self-replication. He is currently a postdoctoral fellow at the Center for Nonlinear Studies at the Los Alamos National Laboratory, a position he has held since July 2018. Sumantra is interested in understanding the biophysics of cell-signaling and molecular communication using tools from statistical physics, theory of disordered systems, and network science.

About the Irwin Oppenheim Award

The award was made possible by generous contributions from Irwin's family and friends along with his students, colleagues, and members of the Physical Review E community. We are deeply grateful to all those who helped establish this award by contributing to the Irwin Oppenheim Award fundraising campaign.